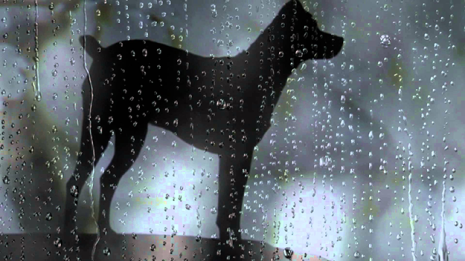 Still from Heart of a Dog written and directed by Laurie Anderson.

I’m not the type of person who is always the first to see every interesting film that comes out. Although I did travel 85 miles to see the first screening of David Lynch’s Inland Empire when it came out in 2006, and I was willing to travel some 200 miles to see Jean-Luc Godard’s 3D debut  (Goodbye to Language, 2014) in New York, more often than not I see things I want to see when they play near me and the time is convenient. Such was the case with Laurie Anderson’s Heart of a Dog, an essay film that came out several months ago but which I just saw this afternoon at the Chatham Orphuem. And what a delight it was to be the only person in the theater watching this contemplative documentary that spans the terrain of memoir, experimental film, and philosophy.

Although it is often summarized as such, Heart of a Dog is not really about the passing of Anderson’s rat terrier Lolabelle. The film begins with Anderson describing a dream in which she gives birth to the dog after having had it implanted in her uterus some time prior. It starts us off on a thread that is woven through the film’s structure. Anderson admits that the dog did not want to be implanted in her but that “it is just the way it had to be.” As we move from there to discover Anderson’s relationship with Lolabelle over several episodes, it’s clear that it is not the dog’s wishes or thoughts—even when the camera takes the dog’s point of view—that we are witnessing; it is Anderson’s own needs that come through, something pet owners don’t always understand.

Anderson weaves in a discussion about the impact of 9/11 (thankfully not including actual footage from the event), our surveillence culture, Buddhist philosophy, her relationship with her mother, why we dream, and the nature of memoir itself. All of these elements had me searching for connections, trying to understand what the film was about.

Is it an essay on death? Perhaps. But it is also about the ways in which we construct understanding of the world around us by putting ourselves at the center. There is a kind of natural self-centeredness that is unavoidable.

I left the theater in a state that was simultaneously thoughtful and accepting. I was intellectually engaged in trying to understand the work, but also very comfortable with not understanding it, on an emotional level. Ultimately, it was a very satisfying experience for me and I would love to hear from others who have seen the film and enjoyed it. What did it make you think about? (And if you haven’t seen it yet… its’ still in Chatham through Thursday afternoon.)